Piapro Studio for NT comes with the Virtual Singer Software indicated below.

Standard version comes with the Virtual Singer Software indicated below.

* The NTvoice library cannot be used with the Standard version of Piapro Studio included in the VOCALOID voice library. 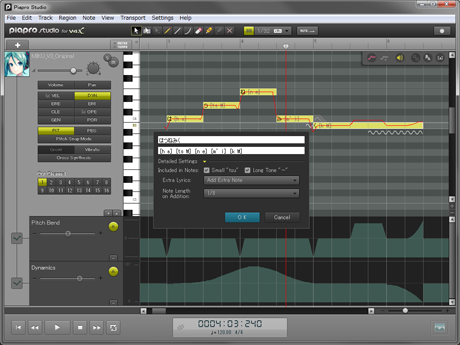 Piapro Studio is a vocal editor that offers smooth operation and an intuitive interface to give you the freedom in production of vocal parts. Not only is there no limitation to bar numbers, Piapro Studio also impresses with its sync function that lets you check vocal parts directly with the produced music in your host application. There are also many parameters available that can be used to enhance singing expression and vocal styles. The “Lyrics Palette” of Piapro Studio allows you to easily input English lyrics with tricky syllable structure. Experience more creativity and freedom in vocal production with the seamless operation of Piapro Studio! 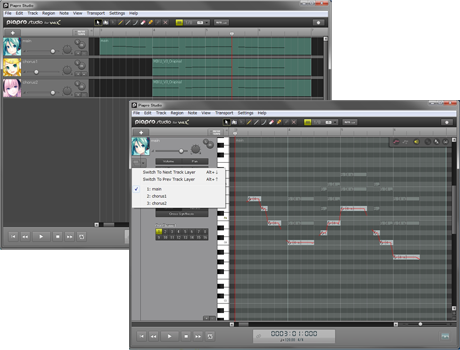 You can select up to 15 singers in Piapro Studio, and therefore easily create choruses and singer ensembles. The “Layer Function” lets you display multiple singer tracks, which allows a smooth and intuitive editing process when creating choruses. When layered, displaying the icon of each singer at the head of the track lets you easily overview the overall vocal track production.(*1)

(*1) The “Layer Function” of Piapro Studio for NT will be supported in future updates. 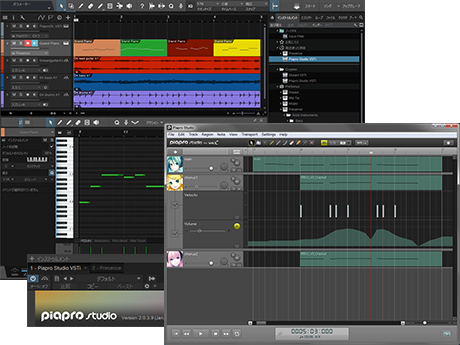 *Standard version of VOCALOID voice library can be used in 32bit.

Other Requirements ● In order to operate the sound module smoothly, we recommend installing the software on a computer with a fast processing CPU and enough RAM memory. ● All specifications are subject to change without notice.

Singing voice technology which has been researched and developed by the National Institute of Advanced Industrial Science and Technology (AIST), is used as part of the basic technology of "Hatsune Miku NT".